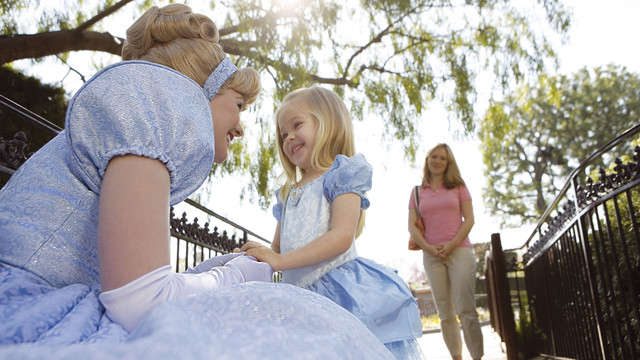 Spend some time with Cinderella, a beautiful servant girl who, with the help of the Fairy Godmother, became a princess.

Cinderella is the most beautiful girl in the land. So much so, her stepmother and stepsisters were so jealous they locked her inside and made her be their servant. But one day, with a bit of help from a spell by the Fairy Godmother, Cinderella was given a beautiful dress, use of a magnificent coach and invited to a royal ball, where she fell in love with the Prince. Fleeing the ball at midnight, the hour when the magic spell is due to end, she leaves behind a glass slipper. The Prince discovers this slipper and uses it to find his one true love. The slipper fits only Cinderella and they live happily ever after.

Cinderella is very charming and loves her animal friends from around the chateau—Bruno the bloodhound, Major the horse and mice Jaq and Gus—because they all helped her go to the ball.