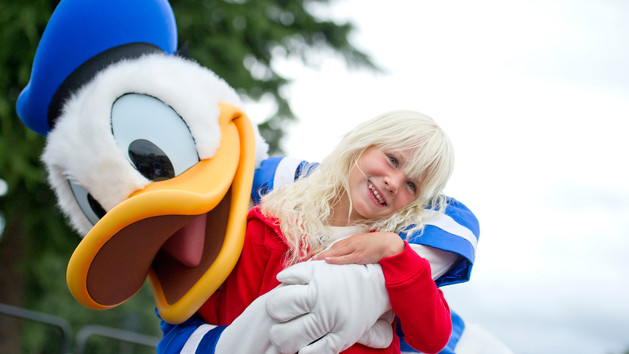 Catch up with Donald Duck for some lovable and loud moments.

Donald made his debut in The Wise Little Hen. Audiences loved his fiery temper, and at one point he was even beating Mickey Mouse in the number of times he was appearing in features. Being so popular, Donald loves to hang around Disneyland® Park meeting fans and having his photo taken. He can often be found causing mischief in the many parades around the Park. Once you've got acquainted with Donald in person, go and see him in Animagique® in Walt Disney Studios® Park. There, he is joined by all his friends to celebrate Disney classics and bring the world of imagination to life before your very eyes. He also makes an appearance in Disney Junior Live on Stage!, where little ones can join in the fun on the storybook stage—it's a laugh a magic minute!

If you want to see Donald Duck, Disneyland® Paris is definitely the place to be. Come along and have an exciting adventure with everyone's favourite duck and his endearing quack!