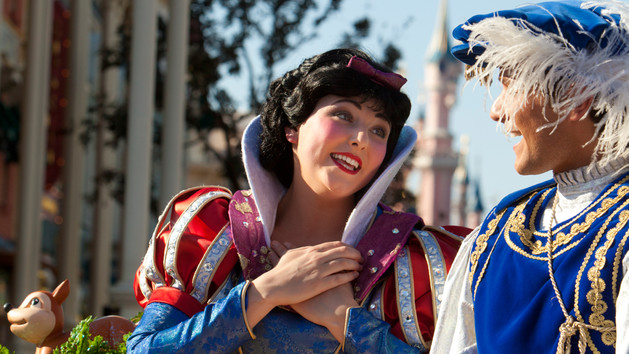 Make a date with Snow White and capture some magical moments that will live happily ever after in the minds of your little ones.

It's Snow White, of course. The beautiful princess, named after her flawless snow white skin, appears in Disney's first ever animated film, Snow White and the Seven Dwarfs.

Snow White is the original fairytale princess. Not only is she beautiful and innocent, she is also a great friend to the seven dwarfs, Bashful, Grumpy, Happy, Sleepy, Doc, Dopey and Sneezy. While they are working at a nearby mine, Snow White cooks and cleans for them and in return they help to defeat the wicked Queen. Snow White also loves apples, so it's no surprise she makes the mistake of biting into the poison one offered to her by the Queen in disguise. The apple sends her to sleep, but no princess is complete without her prince, and he soon arrives with a true love's kiss to awaken her.