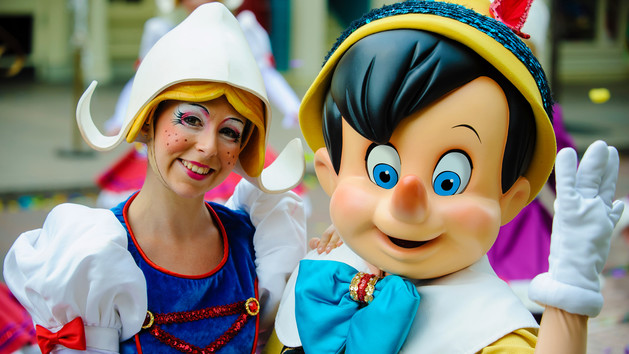 Capture a truly magical moment with the world's most famous puppet.

Pinocchio is a curious and jolly wooden puppet who wants to become a real boy. He is adventurous and wants to live life to the full, enjoying everything that being a real boy has to offer. He was made by woodworker Geppetto, who wished upon a star that his 'little woodenhead' Pinocchio could be brought to life. Before he can be made human, the ambitious puppet must first prove he is brave, truthful and unselfish through a number of exciting adventures.

Pinocchio has a wise best friend called Jiminy Cricket. Jiminy works as Pinocchio's conscience, helping him to prove his honesty and unselfishness. Jiminy is not always very successful though, as Pinocchio spends much of his time getting into mischief. After all, temptation can be hard to resist for any boy, even one made of wood. Pinocchio must avoid telling lies because if he does, his nose grows longer. Although inconvenient, this does help him learn to stay truthful. And is a lesson to all children around the world today.